Are another round of federal assessment waivers in the cards?

02 Aug Are another round of federal assessment waivers in the cards?

Posted at 15:45h in News and Resources by Josh Parrish 0 Comments
0 Likes 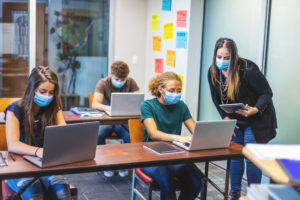 As state testing data continues to roll in and as schools gear up for a new academic year, it’s not too soon to ask how the feds might handle assessment waivers in 2022. Indeed, the question is almost certainly not if, but when states will begin lining up for flexibility in foregoing annual assessments. To wit, one need look no further than the current rhetoric about keeping remote learning in place to see why states might be back on bended knee once again.

Education Week just published a piece titled, “Standardized Tests Could Be in Jeopardy in Wake of Biden Decisions, Experts Say.” In it, one expert is quoted as saying that he expects waiver requests to emerge later this summer through the fall—a timeline consistent with when Michigan and Georgia filed their requests last year. Given how messy things were with testing in the spring, this should come as no surprise to anyone who’s been paying attention.

There’s no question that the current state of play is a tenuous one: two consecutive years without state testing has made it easier than ever for testing skeptics to argue their case. For the federal government, the path of least resistance would be to take a laissez-faire approach, letting the cards fall where they may. What’s more, it’s arguably the pragmatic tack as the U.S. Department of Education appears to be in the throes of an internal tug-of-war on annual assessments, to say nothing of competing power centers adding to the federal farrago.

At the same time, there are more questions than answers. Do the feds have a plan for resumption of state assessments next year? What will their role be on oversight (e.g., ensuring sufficient student participation)? How will they approach test rigor and quality? Unless someone holds Uncle Sam’s feet to the fire, it’s difficult to imagine how states and districts don’t end up in the same place—or heaven forbid, somewhere worse—at this time next year.